January 25, 2008
Gabriel Salvia had a meeting with Vice-President Cobos 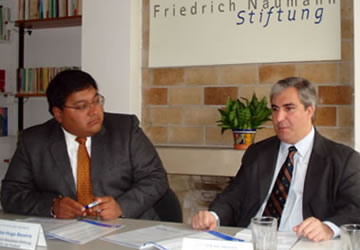 November 23, 2007
CADAL takes part in a Forum on Human Rights in Latin America

November 16, 2007
CADAL supports Relial's Declaration on Venezuela
Support in the struggle of the Venezuelan people to recover their democracy.

August 27, 2007
CADAL attends to the presentation of ''Americas Quarterly'' in Santiago de Chile

August 15, 2007
CADAL proposes the Assembly to Promote Civil Society in Cuba for the award given by Argentine Ministry of Foreign Affairs
The Center for the Opening and Development of Latin America (CADAL), asked the Argentine ambassador in Cuba, Darío Alessandro, to nominate the "Asamblea para promover la sociedad civil" from that country, for the "International Award on Human Rights Emilio Mignone".

August 15, 2007
CADAL at The Atlas Experience in Canada

May 28, 2007
CADAL promotes a Statement in favor of Press Freedom in Venezuela
The Statement joins to the concern expressed by prestigious international organizations for the political motives of President Hugo Chávez for decreeing the closure of Radio Caracas Televisión (RCTV), the oldest private TV station of the country, whose license expired on May 27, 2007. Also, the Statement points out that this political decision by the government of Venezuela of not renewing a license to a TV station is a serious worsening of freedom of expression in Venezuela, and it is in violation of the first article of Ushuaia (Democratic Clause).