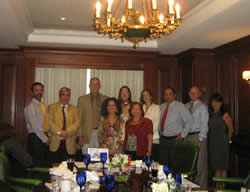 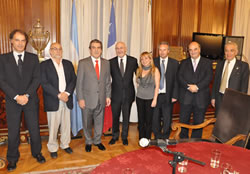 December 3, 2010
The Legislature of the City of Buenos Aires honored Eduardo Frei

November 25, 2010
Visit of the Swedish Ambassador

September 30, 2010
Global Geopolitical Change
Plataforma Democrática informs that it is already available, and free to access, the colection of articles on Geopolitical Change and the future of Democracy in Latin America: plataformademocratica.org 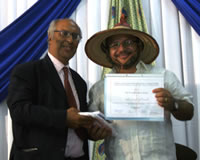 August 13, 2010
CADAL proposes the Cuban disident Guillermo Fariñas to the International Award of Human Rights Emilio F. Mignone
Emilio Mignone heroically fought together with few people against the Argentine military dictatorship (1976-1983), while the Cuban regime helped dictator Jorge Rafael Videa to block the resolution condemning Argentina in Geneva for human rights violation. This is why, what better way to make a homage to Mignone than to award someone who is currently facing in a peacefull and brave manner a totalitarian regime that is still in power since more than half a century and which government was a known accomplice of the Argentine military dictatorship.

August 12, 2010
Justice as the esence of democracy

August 3, 2010
Claim of political opening in Cuba after the announcement of the release of political prisoners
The initiative arosed after the recent announcement of the release of political prisoners in Cuba and for considering this fact as an opportunity to ask again the government of that country "to give way to the guarantees of a democratic system and open the flows of expression of its people". In that sense, the Declaration states that a first step would be "that the Cuban government recognize the right to freedom of association and expression in its country, erasing the legal dispositions that restrict and oppress the excercise of those fundamental rights".

July 26, 2010
Economic-Institutional Alert: Moreno bites his tail
The persistent fall of Argentine exports has its origin in the duality of conception set by the economic model in function: high dollar or protection of "Argentine's table" or, from another point of view, exportation or consumption.

July 19, 2010
Andres Canizalez of Venezuela Awarded Titus Brandsma Award 2010
More than 1900 entries and candidates were submitted for 8 categories of awards. The jury members highly appreciated the quality of award entries and candidates. The prestigious Titus Brandsma Award will be conferred upon Professor Canzalez at the UCIP World Congress to be held at Ouagadougou, Burkina Faso from 12 to 19 September 2010. Andrés Cañizalez is journalist and university professor in Venezuela. He is member of the Academic Council of CADAL, and participated in different events in Buenos Aires and Montevideo.

July 1st, 2010
New addresses of CADAL in Buenos Aires and Montevideo
As of July 1, the new office of CADAL in Buenos Aires is at Reconquista 1056 piso 11 B, two blocks away from train and metro stop Retiro. Also, since June 1, CADAL has a new office in Montevideo, Uruguay. The office is at Yaguarón 1407 piso 4º, in the Edificio de los Profesionales, a block away from the tradition Avenue 18 de Julio.

June 7, 2010
Claim for recognition of Cuban Civic Movement at OAS
The head of the Center for the Opening and Development of Latin America (CADAL), Gabriel Salvia, claimed to the foreign ministers gathered in Lima also to lift the "implict suspension that the majority of the Hemispheric states hold towards the human rights supporters in Cuba and thus comply with article 1 of the Inter-American Democratic Charter.

May 10, 2010
2010 Award to Democratic Opening in Cuba
In its first edition, Red Puente Democratico Latinoamericano appointed its member institute in Chile, Corporación Justicia y Democracia, to form a jury to give this award. In this sense, the jury formed by Patricio Aylwin, Soledad Alvear, Lourdes Flores and Patricio Walker decided to give the 2010 Award to Democratic Opening in Cuba to "Varela Project".

May 4, 2010
CADAL sponsors a seminar of reflection on bicentenary

April 28, 2010
CADAL is registered in the OAS
The Permanent Council of the Organization of American States (OAS) aproved approved in its session of April 28, 2010, the request by the Center for the Opening and Development of Latin America (CADAL) of becoming a registered civil society organization before OAS, following the rules adopted by resolution CP/RES 759 for that purpose.

April 19, 2010
From entrepreneur to businessman

April 16, 2010
CADAL on Facebook
In the search of reaching a bigger audience and adding new channels of communication and promotion, the Center for the Opening and Development of Latin America (CADAL) launched its Facebook page, the biggest social network in the world. http://www.facebook.com/cadal.org