April 15, 2009
Geneva Summit: Stop Corruption in the UN
Next Sunday, April 19 the Geneva Summit for Human Rights, Tolerance and Democracy will take place. It is a meeting of human rights activists from all over the world, looking to solve the real problems of human rigths in society.

April 3, 2009
CADAL takes part in a meeting of Americas Society / Council of the Americas in Brazil

March 31, 2009
The UN Human-Rights Council restricts freedom of expression regarding the “defamation of religion” and Argentina and Uruguay abstained

March 27, 2009
CADAL signs the Joint NGO Statement on Danger of UN ''defamation of religions'' Campaign
The statement, signed by 188 NGOs, illustrates a deep concern relative to the fact that in some countries resolutions against “defamation of religions” are used as a common tool both to silence and to intimidate human-rights activists, religious dissidents as well as other independent voices.

January 29, 2009
Press Release: Before Cuba's review at UN
Since on Februrary 5, 2009 the Universal Periodic Review of Cuba will take place at the United Nations Human Rights Council, the Center for the Opening and Development of Latin America (CADAL) addressed the Foreign Ministers of Argentina, Chile and Uruguay, member countries of the Council.

December 19, 2008
Horacio Reyser named Director of CADAL's Business Council
The main objective of the Business Council will be to serve as a link between CADAL and the business sector while at the same time feed the organization identifying the most worrying matters of the national realities to submit them to objective analysis and research. In turn this will help to form civic conscience that can then be turned into concrete actions of government, legislators, judges, citizens and businessmen. The new Director of CADAL's Business Council is an associate of Southern Cross and holds an Industrial Engineer degree from Instituto Tecnológico de Buenos Aires (ITBA). 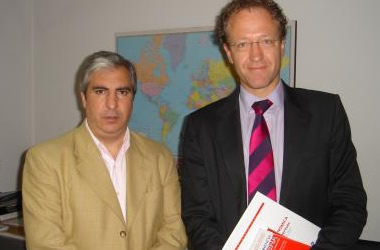 November 26, 2008
Claim to Bachelet to present a book by a Chilean journalist at the 2009 Cuba Book Faire

November 7, 2008
Book published by CADAL and the foundations Hayek and Konrad Adenauer is analyzed in a gathering in Cuba