Néstor Kirchner would easily win re-election as Argentina’s president. What was the thinking behind the decision to have his wife run instead? 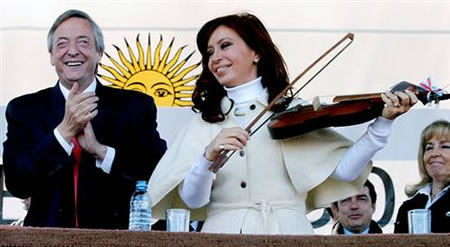 July 9, 2007 - Move over Hillary, another First Lady-turned-senator is now seeking her nation’s highest office. Months of feverish speculation ended last week, when the office of Argentine President Néstor Kirchner leaked word that his 54-year-old wife Cristina would run in his stead in elections scheduled for October. Close aides of Kirchner have been touting Cristina’s qualifications to succeed her husband since last November, and the senator from the Perónist Party enters the race as a formidable frontrunner against a divided opposition that is unlikely to unify around a single candidate. “The wife of the president is the politician with the best image in Argentina after Kirchner himself,” notes political analyst Rosendo Fraga.

Within Argentina, Cristina Fernàndez de Kirchner’s presidential bid will be seen as the latest in a series of important roles assigned to women throughout the tumultuous history of the Perónist movement. Juan Domingo Perón’s fiery second wife Evita mobilized fanatical support for the onetime general among the country’s working classes before leukemia took her at 33 in 1952; Perón’s third wife Isabel succeeded him as president upon his death in 1974.

But the parallels between Cristina and Hillary Clinton are equally striking. Like the current pacesetter among Democratic Party presidential hopefuls, Cristina is a prominent legislator who met her future husband when they were both law school students. Each of their spouses first achieved national recognition as the youthful, left-leaning governor of a backwater state (or, as in the case of Kirchner, a province). The Kirchners are a marriage of like-minded intellectual equals, and by all accounts Néstor constantly consults Cristina on key government policy issues. Mrs. Kirchner can be every bit as divisive a figure as Mrs. Clinton, even within the ranks of her own party. Cristina’s fellow Perónist senator Hilda “Chiche” Duhalde savaged her on the airwaves in Buenos Aires this week, calling the First Lady  “a woman who looks down on the poor” with a “very intolerant, very haughty personality” to boot.

Her colleague’s nasty comments notwithstanding, Cristina is generally regarded as a center-left politician. But like Hillary, the Argentine has also shown herself quite ready to sacrifice ideology on the altar of pragmatism when the occasion warrants it. The two women have met on at least a couple of occasions, and Cristina expressed her great admiration for the junior senator from New York in a rare interview in 2005. “She’s a very intelligent, very contemporary woman and I like her a lot,” she told NEWSWEEK. “It’s also a question of gender solidarity on account of the attacks she suffered from the outset of her husband’s presidency because it was said that she attended meetings or meddled in matters that were not appropriate for a First Lady.”

The outgoing president of the republic touted his better half’s credentials on Tuesday, predicting that Mrs. Kirchner would undoubtedly “do a much better job of governing than we have done until now.” But it remains unclear why exactly Néstor Kirchner chose to stand down instead of seeking re-election later this year. The 57-year-old native of Patagonia has held elected office for two consecutive decades and has enjoyed sky-high approval ratings throughout most of his four-year-long presidency. Rumors have swirled around his health ever since he underwent emergency gastric surgery in 2004. But more persuasive explanations can be found in adverse political developments inside Argentina and the sheer scale of the Kirchners’ political ambitions. Two candidates and a ballot measure that enjoyed the president’s full support have gone down in flames in recent provincial and municipal elections. And pundits with good ties to the government believe that Cristina’s candidacy is an integral part of a long-term plan to keep power in the First Couple’s hands through 2019. Under that slightly implausible scenario, she would win this year’s election, serve her full term and then give way to Néstor in the 2011 election. He would then return the favor four years hence and pave the way for a second stint for Cristina in Argentina’s Pink House.

Such a vision grossly underestimates the Argentine electorate’s notoriously fickle mood swings towards its political leaders. President Carlos Menem was the toast of the nation when the economy was roaring in the mid-1990s, but his image had become so tarnished by corruption in May 2003 that he chose to bow out of a second-round runoff against Kirchner rather than face a humiliating defeat. Neither Menem’s predecessor, Raul Alfonsìn, nor his successor, Fernando de la Rúa, even managed to serve out their full presidential terms. But the Kirchners seem confident of their ability to break with history, and the latest opinion polls show Cristina hovering between 41 and 45 per cent in voter preference nearly four months ahead of the Oct. 28 balloting.

Nonetheless, that is roughly 10 percentage points less than her husband’s approval ratings, and what would have been a cake walk for Néstor now has the makings of a more competitive race with Cristina on the ballot. The government’s recent series of setbacks at the polls in two provinces and the city of Buenos Aires mirrors rising discontent with a natural gas shortage in the middle of the southern hemisphere winter and a spreading public works corruption scandal that has already claimed the heads of two senior officials. But Argentines are grumbling loudest about double-digit inflation that the Kirchner government has strangely tried to mask by systematically cooking the official cost-of-living figures. That bald-faced ploy isn’t fooling anyone at the supermarket cashier tills, however, and the prospect of an outright victory for Cristina on the first round of voting is starting to recede. “The opposition has been emboldened by the government’s defeats, and things are not as clear as they seemed six months ago,” says Gabriel Salvia, director of the Buenos Aires-based Center for the Opening and Development of Latin America think tank. “We’ll have to see what happens inside the Perónist party.”

More a broad-based movement than a modern political party, Perónism is host to a heterogeneous range of factions and world views. And within its ranks there is no shortage of anti-Kirchner hacks itching for a chance to avenge the real and imagined snubs visited on them by Argentina’s ultimate power couple over the past four years. A meeting of dissident Perónist leaders last Friday agreed to nominate their own presidential and vice-presidential candidates to run against Cristina, and if they go forward with those plans Mrs. Kirchner would be hard-pressed to crest the 40 percent threshold needed to avert a runoff election at year's end.

Already, her campaign launch has hit a strange note. As Buenos Aires gets plastered with posters showing the very photogenic Cristina and the words “The change is only beginning,” voters could only be wondering what real political change the other half of the First Couple is likely to bring. At least that’s not a question likely to be asked of Hillary Clinton—who’d certainly represent an unmistakable departure from her predecessor should she win in 2008.