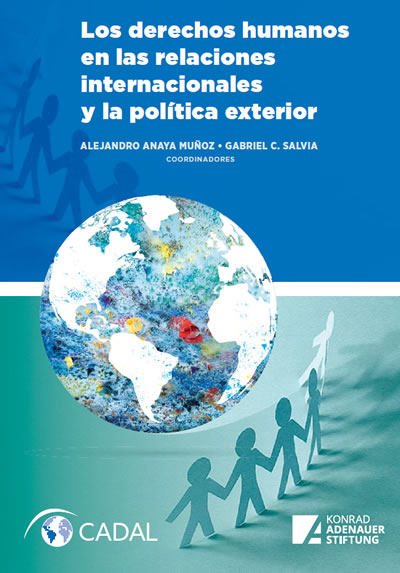 Presentation: Alejandro Anaya Muñoz and Gabriel C. Salvia. Human rights from international relations, by Alejandro Anaya Muñoz. Human rights as restriction and foundation of sovereignty, by Julio Montero. Human rights before and after the fall of the Berlin Wall, by Günter Nooke. A Crisis in the Concept of Human Rights at the Beginning of the 21st Century and the Struggle for Truth, Freedom and Justice, by Yevgeniy A. Zhovtis. Democracies and dictatorships before the Universal Human Rights System: the cases of Argentina and Cuba, by Brian Schapira. The limits of foreign policy on human rights and the importance of international democratic solidarity, by Gabriel C. Salvia. Cuba: A New Global Samaritan ?, by Manuel Cuesta Morúa. Post Covid-19 Freedom of Movement, by Sybil Rhodes. About the Authors- Recommended Bibliography.

Human rights were inserted into international legal and political dynamics as a result of their inclusion in the normative and institutional structure that emerged at the global and regional level, after the end of the Second World War. In other words, with the entry into force of the Charter of the United Nations, the Charter of the Organization of American States and the Statute of the Council of Europe, as well as the adoption of the American Declaration of the Rights and Duties of the Man and the Universal Declaration of Human Rights and the entry into force of the European Convention on Human Rights and Fundamental Freedoms, human rights became part of the central aspirations and not only of some nations - governed by constitutions based on liberal values and Republicans - but from the international community as a whole.

Although with some ups and downs, with the passage of time, the legal status of human rights has been strengthened, while its political relevance has been consolidated in the international arena. Human rights are today fundamental referents in the definition of "should be" and what an "appropriate behavior" implies; at least for countries that aspire to be considered as worthy or full members of the community of "civilized states." In this way, and despite different dynamics that question or even weaken them in practice - such as the persistence of authoritarianism, the securitization of public agendas and the reemergence of nationalisms - human rights are an inescapable component of relations. international: that is, of the dynamics of interaction - sometimes cooperative and sometimes competitive or even openly hostile - between States and between these and other types of actors, across borders.

We cannot understand international politics today without taking into account human rights and the normative and institutional structure that has developed around them. But human rights, as norms and as institutions, are thought and designed to protect people; to safeguard their rights, mainly in the face of the power of the State, which despite the passage of time continues to repeatedly show its dark side: its tendency to abuse, oppression, intolerance and the preservation of inequality. States, on the other hand, remain the dominant actors in international relations and tend to view intervention in their internal affairs with suspicion and to watch each other's backs. The "national interest" (or, rather, the interest of the elites in power, within each state) remains a dominant force in relations between nations and, therefore, in their foreign policy. This is a serious problem for the human rights agenda, because its enforcement often runs counter to the interests in question. Thus, human rights continue to swim against the current, almost eighty years after their emergence on the international scene.

What are the chances, then, that they will prevail and flourish in a global context still dominated by the power of sovereign states, jealous of external interference and holders of interests that are often far from coinciding with the promotion of human dignity? ? On what kind of arguments does the claim or demand that affirms that human rights prevail over the sovereignty and interests of the States and the economic and political elites in power rest? What obstacles of yesteryear and what new challenges face the promoters and defenders of equality, freedom and human dignity in the world? These types of questions guide and inspire the essays that make up this work. From different visions and professional experiences (mainly activism and academia), the authors recognize and analyze the obstacles and challenges faced by the human rights agenda and, together, they interweave a series of ideas and arguments that lead us not only to reaffirm belief in the value and merits of human rights, but also, as Kathryn Sikkink1 recently emphasized, to substantiate our reasons for hope.

This book summarizes the work and challenges of CADAL in the promotion of human rights and international democratic solidarity, ideals shared with the Konrad Adenauer Foundation, whose support to publish this work was fundamental.