Human Rights and Economic Policy Under the Argentine Military Dictatorship, 1976-1983 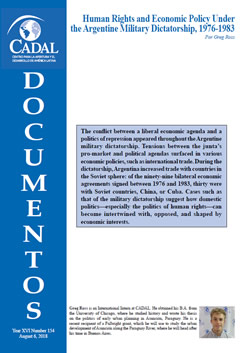 The conflict between a liberal economic agenda and a politics of repression appeared throughout the Argentine military dictatorship. Tensions between the junta’s pro-market and political agendas surfaced in various economic policies, such as international trade. During the dictatorship, Argentina increased trade with countries in the Soviet sphere: of the ninety-nine bilateral economic agreements signed between 1976 and 1983, thirty were with Soviet countries, China, or Cuba. Cases such as that of the military dictatorship suggest how domestic politics—especially the politics of human rights—can become intertwined with, opposed, and shaped by economic interests.