The more things change in Cuba’s external relations, the more they remain the same in its domestic politics 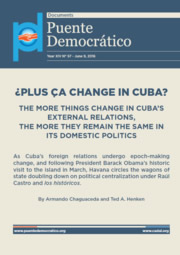 As Cuba’s foreign relations undergo epoch-making change, and following President Barack Obama’s historic visit to the island in March, Havana circles the wagons of state doubling down on political centralization under Raúl Castro and los históricos.

By Armando Chaguaceda and Ted A. Henken

Researcher-professor at Universidad de Guanajuato. BA in Education (2000) and History (2006), with a Masters degree in Political Science (2004) and a PhD in History and Regional Studies (2012). Professor of History and Political Theory at Universidad de la Habana (2003-2008), Sociological Theory and Compared politics at Universidad Veracruzana (2011-2013) and Public Policies at El Colegio in Veracruz (2014). Specialized in the study of the relationship between civil society-progressive governments-democracy in Latin America, with emphasis in the cases of Cuba, Nicaragua and Venezuela. Co-author and coordinator of several books and author of tens of academic and opinion articles on the aforementioned issues, published in US, Europe and Latin America, places where he has given several conferences and research visits.

Associate Professor of Sociology with a joint appointment in the Department Black and Latino Studies at Baruch College, City University of New York. PhD in Latin American Studies from Tulane University. President ex-officio of the Association for the Study of the Cuban Economy (ASCE, 2014-2016) after serving as President of ASCE from 2012-2014. Frequently interviewed by leading international newspapers and media outlets on Cuba, including The New York Times, CNN, The Wall Street Journal, USA Today, Time Magazine, the AP, Reuters, and NPR. He has also served as a consultant on Cuba for the White House, the U.S. Department of State, the IMF, the Mexican Foreign Ministry, Freedom House, Human Rights Watch, CNBC, and The Boston Red Sox.

Armando Chaguaceda and Ted A. Henken