During June 4 and 5, the members of Red Puente Democrático Latinoamericano got together to also participate on June 4th at the 2010 Inter-American Democratic Forum at the Peruvian Congress. 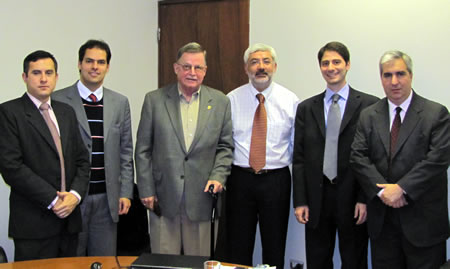 The first meeting began with the thanking videos for the work of the Network by Oswaldo Payá Sardiñas, from Varela Project; the wife of Omar Rodríguez Saludes, Cuban journalist with a sentence of 27 years in prison; and Jorge Olivera Castillo, journalist, political prisoner with a an extra penal licence and author of the book "Antes que amanezca", published by  different institutes of the Network. The videos were taped in Havanna, Cuba, on may 2010.

Then, they coordinated the details of the 2010 Inter-American Democratic Forum; and made a balance of activities between February and May 2010, highlighting the colection of signatures for the declaracion "The excercise of rights is no crime"; they announced the writing of the digital book "Esperiences of Latin American civil society for the democratic opening in Cuba", analizing the advantages and benefits of a digital book; and they decided the person they will distinguish with the Award Democratic Latin American Solidarity with Cuba.

On the second day of work they analized the incorporation of new members. They came to the proposal of building a profile of those who can be members of the network. They decided to create a series of criteria and requirements to form the network, among them: a) Be a non profit SCO based in a Latin American country; b)an explicit and formal adhesino to the mission and vision of the network; c) its thinking and institutional action must be oriented to the promotion of democratic values and human rights; d) with a proven acknowledgment and prestige in the fulfillment of its institutional mission within its country; e) with a plural attitude.

Besides, as a criteria of conduct they proposed: to show an attitude of coherence with the declared principles; to asume a rol within the network with a demonstrable accomplishment through an annual report; and to participate in the annual meetings of the network.

On the other hand, in the process of elaboration of a statute of the Network they recommended to build a Managing Council with a representative from each associated institute of the network; an Executive Council formed by representatives of the institutes with financial resources for the network and regional secretaries.