Freemuse and CADAL alert for artistic repression in Cuba

International human rights organisation Freemuse and CADAL, based in Denmark and Argentina respectively, express their concern about the resurgence of repression of referents of Cuban independent culture and express their solidarity with the artist Luis Manuel Otero Alcántara, recently arbitrarily detained. 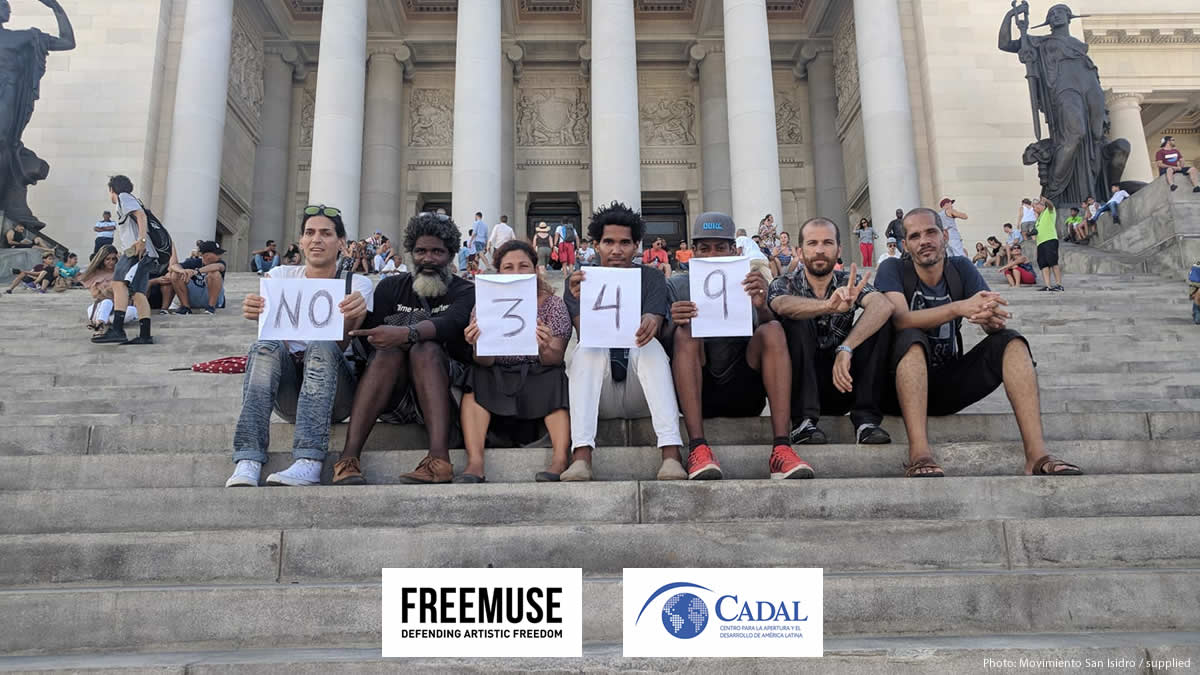 On the evening of Thursday 12 September, independent Cuban artist Luis Manuel Otero Alcántara celebrated the first anniversary of the declaration of the San Isidro Movement along with other group members at the Gorria Gallery located in the San Isidro neighbourhood, Old Havana. After leaving the venue, police first stopped the poet Amaury Pacheco, and then Otero Alcántara. The artist was then arbitrarily arrested, handcuffed and admitted to a prison cell. It wasn't until the next day that he was informed that he would be prosecuted for “improper use of national symbols”. He was not allowed to make a call and did not accept to have his fingerprints taken.

Following his detainment for more than 72 hours, the artist was released by Cuban political police agents. He was not charged in writing but was warned to not leave his home after 11 p.m., to not organise meetings at his home and to not drink alcohol or attend events, illegally establishing an unofficial 'house arrest'.

For his exercise of artistic freedom, Otero Alcántara is also accused of "disrespecting the authorities, aggravatingly because they are figures of the revolution". This arbitrary detention and accusations are informal, illegal and they violate all standards on the exercise of human rights in general and cultural rights in particular.

CADAL asserts that this aggression against Otero Alcántara is mainly due to his membership and involvement as an artist in the San Isidro Movement, a group repressed by the authorities because they do not tolerate his critical opinions on state policy in cultural matters, all of which constitute a violation of his right to profess opinions, ideas or beliefs and not to be disturbed by these, a right that constitutes a manifestation of the right to freedom of expression.

Freemuse and CADAL express their solidarity with Luis Manuel Otero Alcántara and the members of the San Isidro Movement, and ask the embassies in Cuba of countries that expressed themselves in the last review of Cuba in the UN Human Rights Council in a categorical way to denounce harassment of human rights activists, repression of freedom of association, expression and assembly, to provide them with protection, moral support and recognition through cultural cooperation agreements.

Freemuse and CADAL also request pronouncements and interventions on the situation in Cuba by UN special rapporteurs on freedom of association, expression, arbitrary detentions and cultural rights; and reiterate the request to the European Union for its Delegation in Cuba to include independent artistic initiatives in cultural cooperation on the island with a view to defending the right of freedom of expression and not extending the illegality of thought that the party regime imposes on them.

Finally, Freemuse and CADAL request the intervention of the international democratic community to intercede with the Cuban government requesting the release of the musician Maikel Castillo Pérez sentenced to a year in prison at the end of 2018 for giving a show in La Madriguera, along with other artists, proclaiming against Decree 349 that restricts the freedom of artistic expression in Cuba.

Freemuse is an independent international organisation advocating for and defending freedom of artistic expression. We believe that at the heart of violations of artistic freedom is the effort to silence opposing or less preferred views and values by those in power—politically, religiously or societally—mostly due to fear of their transformative effect. Our work includes monitoring and documenting violations of artistic freedom, as well as exposing laws and policies that enable and sustain these violations. Freemuse’s approach is human rights-based and provides an international legal framework, as well as lays out the principles, for accountability, equality, non-discrimination and participation.

The Center for the Opening and Development of Latin America (CADAL) is a private, non-profit and a-partisan foundation, established on February 26, 2003 in Buenos Aires, Argentina, whose mission is to investigate, encourage and support Respect for civil, political and economic freedoms. To this end, CADAL prioritises the defence and strengthening of democracy as a pillar of economic and social progress, and the international promotion of human rights through the development of publications and audiovisuals, events, requests to governments and organisations, and support for democratic activists.