With the participation of two independent Cuban artists, Luis Manuel Otero Alcántara and Yanelys Núñez Leyva, who were invited as speakers, the conference “Cuban Artists Vs. Decree No. 349: A document that legalizes censorship and discrimination” was held at CADAL’s headquarters.

In the light of the prompt implementation (December 2018) of the decree law 349, which has already been signed by the Council of Ministers of the Cuban Republic, artists and promoters, who live on and off the Island and are deeply concerned about the developments regarding culture in their country, started a campaign against the decree last July 21. The campaign calls for a dialogue between artists and officials in the middle of an ongoing debate about Cuba’s new Constitution. 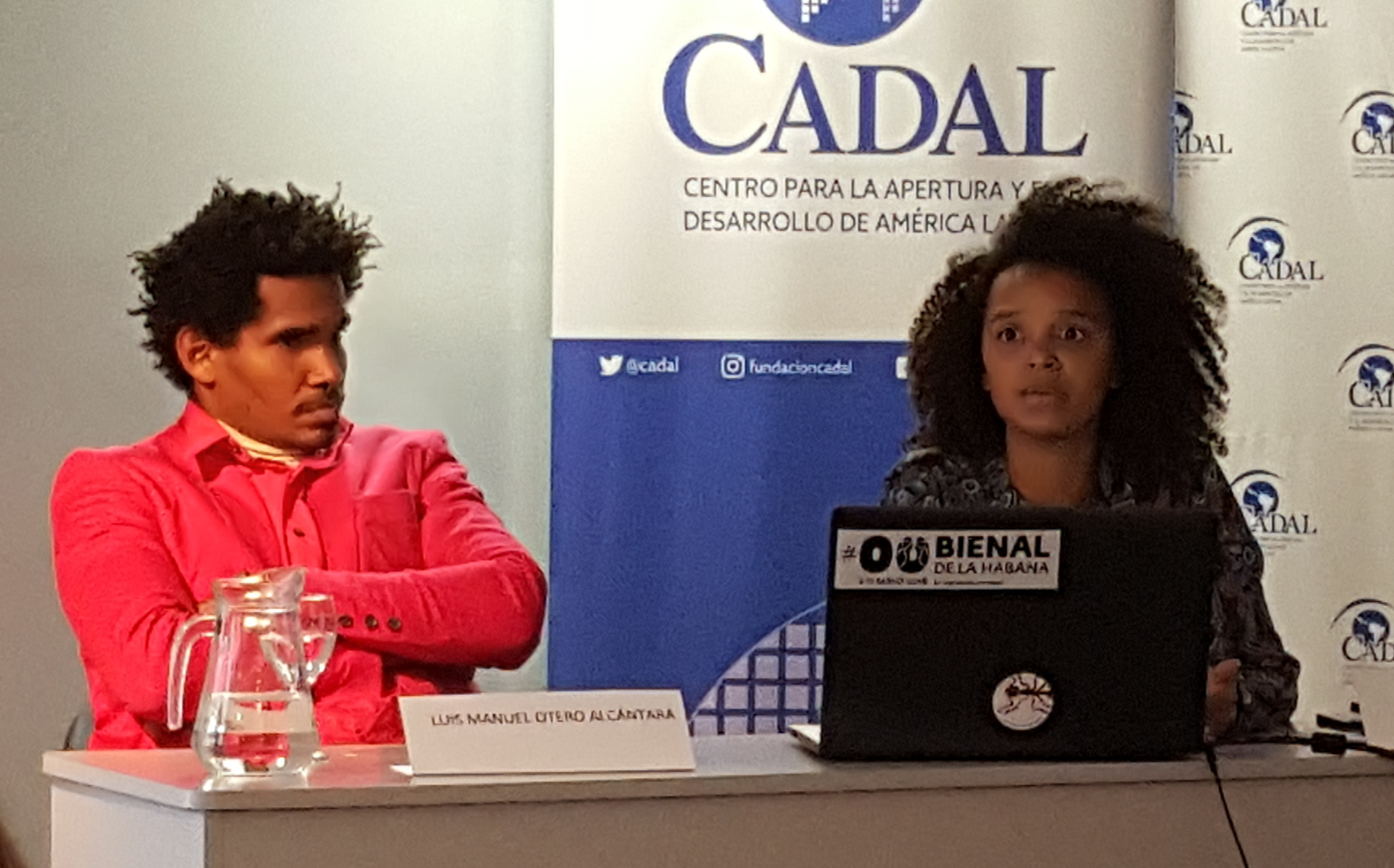 The disapproval of the legislative decree 349 does not only rest upon the fact, that the decree was drafted without any prior dialogue with Cuban artists, nor because it directly affects all self-taught artists who work from alternative spaces or whose opinion differ from the ideology of the State. It rather stems from the fact that this document legalizes censorship and discrimination and that it incites new corruption mechanisms and violently curbs all cultural production within the country. 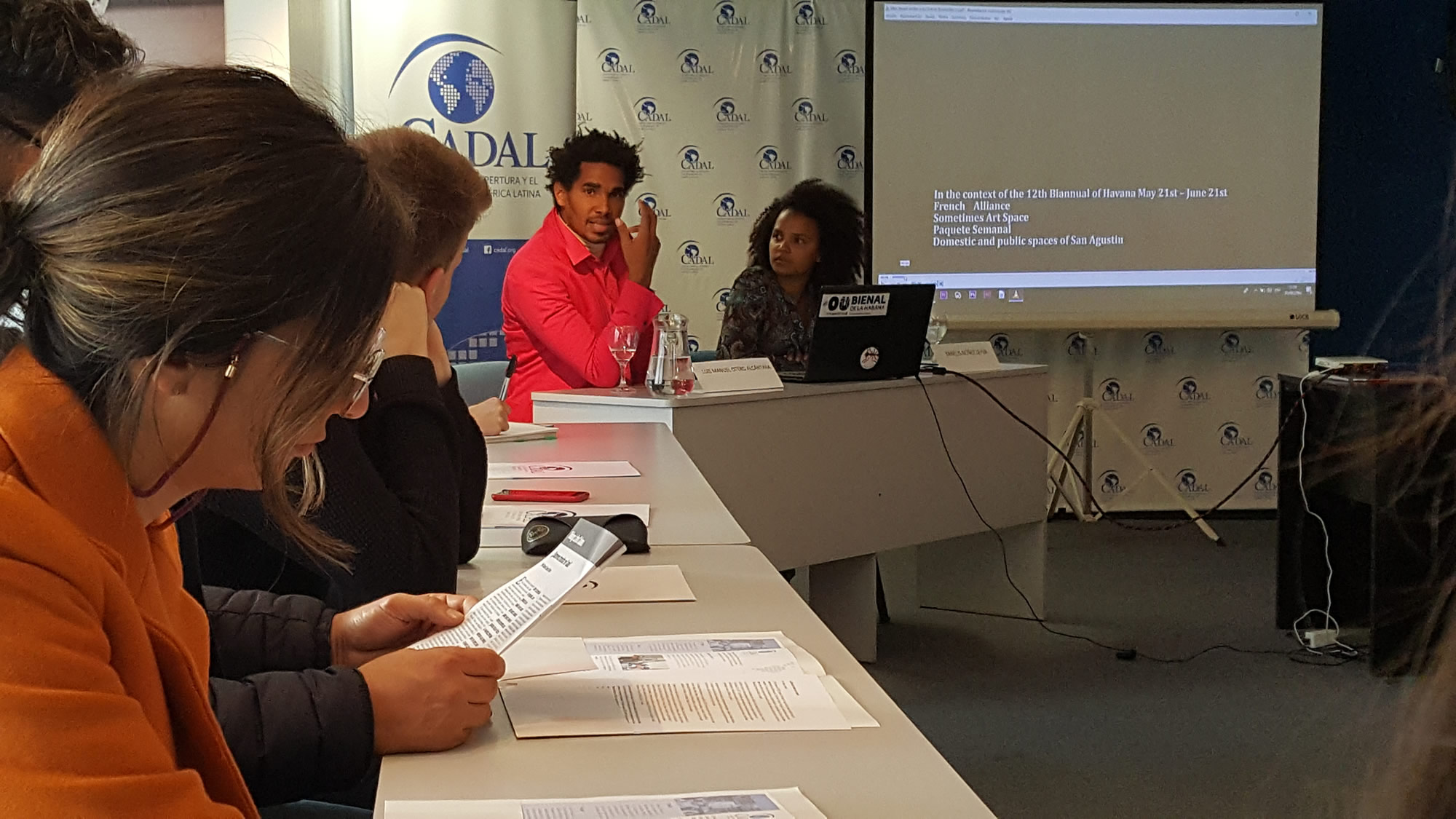 Luis Manuel Otero Alcántara and Yanelys Núñez Leyva are the founders of the “Museum of Dissidence in Cuba (MDC)”, which operates as an online platform but can also be projected in various ways into real life. Their project won the Freedom of Expression Award 2018 of the British organization INDEX. Both artists organized and managed Havana’s alternative #00Bienal, the first independent art exhibition put into practice this year in Cuba, as response to the Ministry of Culture postponing the 13th Havana Biennial until 2019. 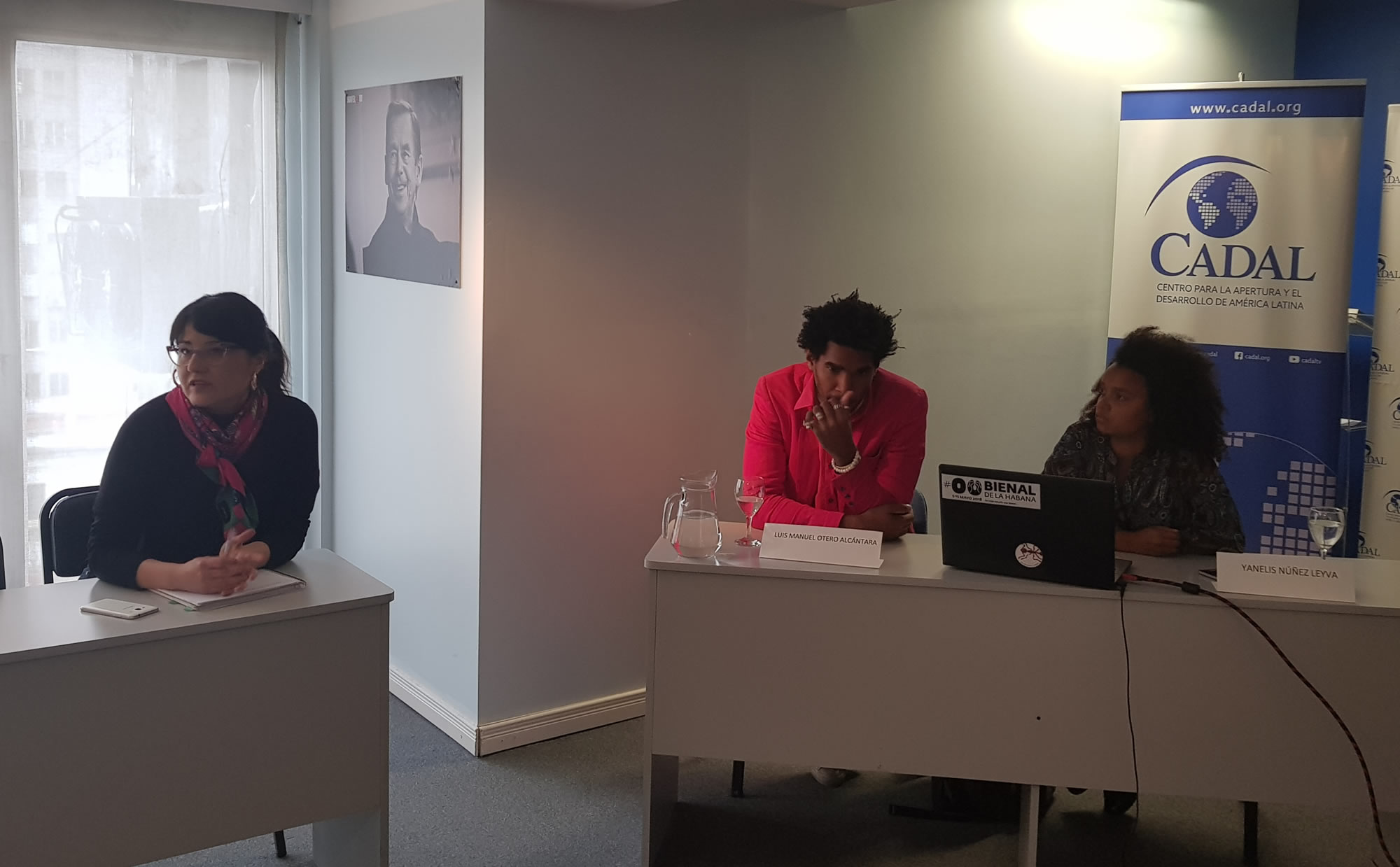 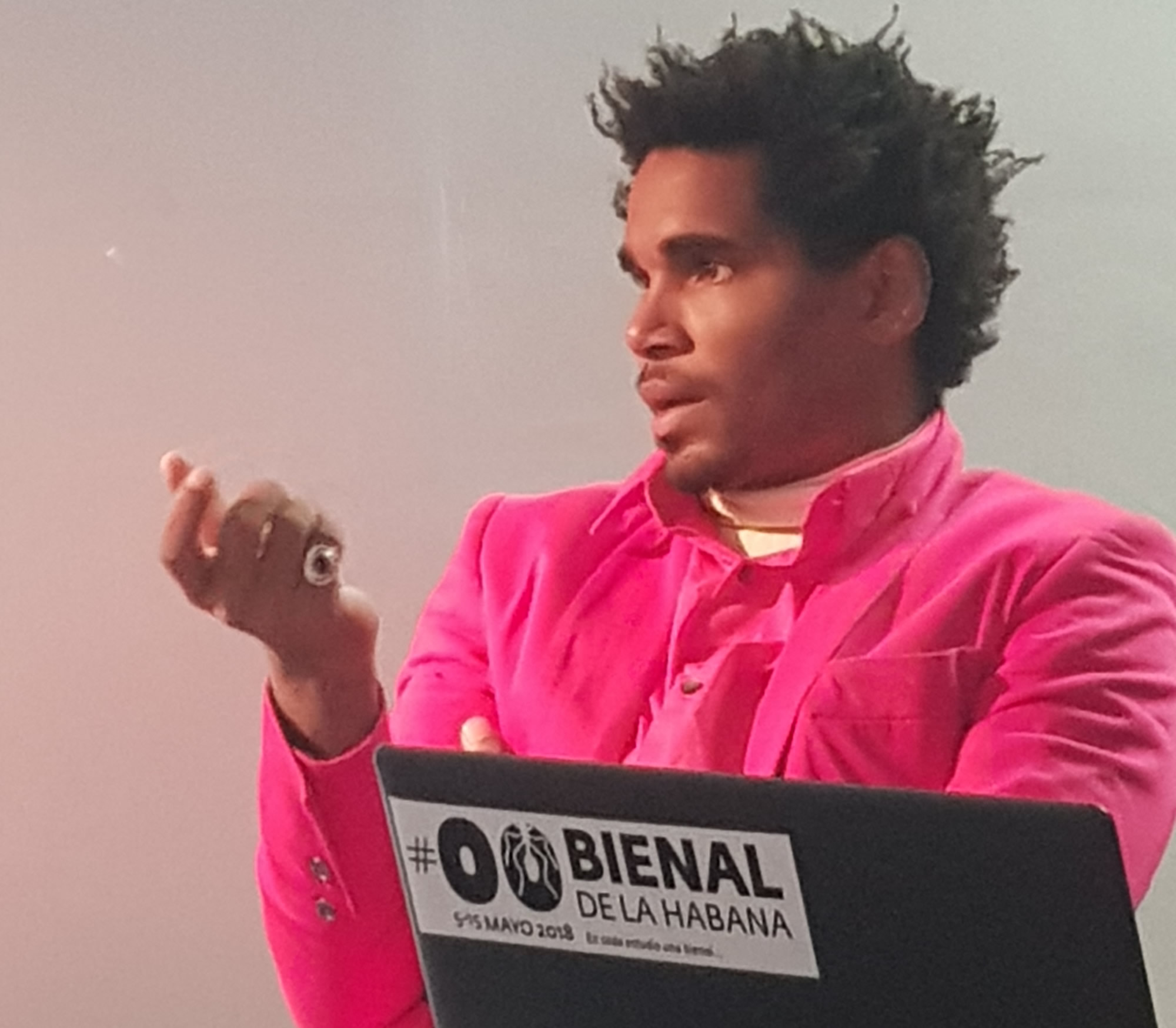 Luis Manuel Otero Alcántara (Havana, 1987) is a self-taught visual artist. He studied Physical Culture at the Manuel Fajardo University. Among his artistic merits are several personal projects such as Materialización del objeto soñado III (Materialization of the Dreamed Object III) at the 1st Asunción Biennial in Paraguay, and Welcome to Yumas, presented as part of Hors-Pistes: La Primavera del amor at the 12th Havana Biennial. He has also participated in various group exhibitions both inside and outside the country, among which stand out No sabemos volver solos at El Ranchito-Matadero, Spain and La madre de todas las artes, at Centro de Arte Contemporáneo Wifredo Lam, Cuba. Reviews of his work were published in Noticias de Artecubano, Havana Times, Cubanet, Art on Cuba, PUBLIC Magazine, Revolución y Cultura, Oncuba Magazine, Vie des arts, etc. The title of his latest public interventions are ¿Dónde está Mella? (Where is Mella, at Hotel Manzana Kempinski, 2017) and Lo que ha Pistoletto no se le ocurrió (2017). His online works include Indian Summer Diary, I love Canada, Canada love me (2016) in which he criticized the arbitrariness of power and its impact on people's hopes and dreams.

In 2016, he founded the Museum of Dissidence in Cuba (MDC) together with Yanelys Núñez Leyva.

On January 24, 2018 he presented, with the co-authorship of Yanelys Núñez and as part of the event Hors Pistes: La Nación y sus ficciones, the performance Otro Tratado de París (Another Treaty of Paris). A project commissioned and produced by Centro Pompidou and Elegoa Cultural Productions. Curated by Catherine Sicot. 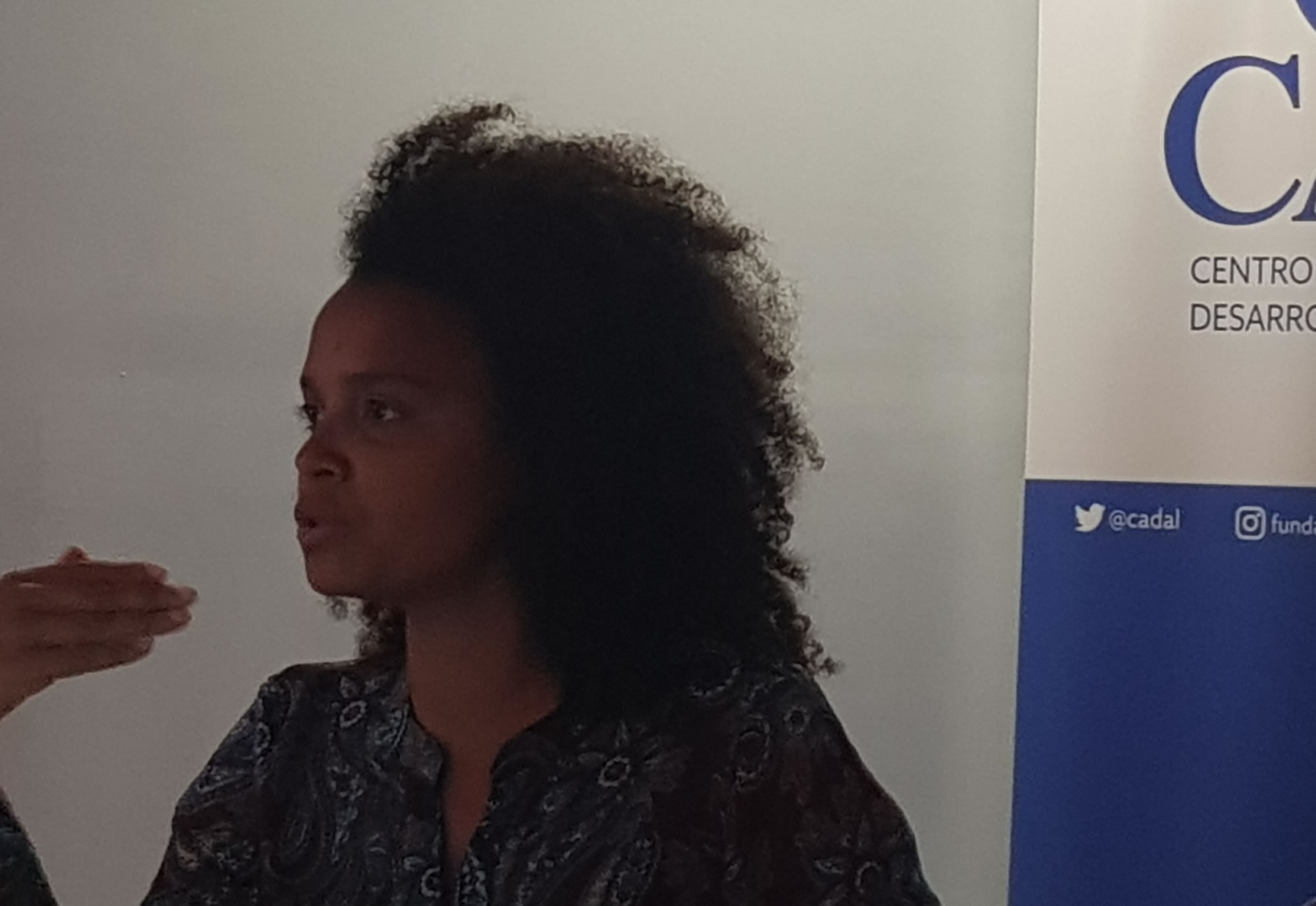 Yanelys Núñez Leyva (La Habana, 1989) is a curator and art critic. She studied History of Art at the School of Arts and Literature of the University of Havana. From 2012 to 2016 she was part of a team of specialists of the gallery Espacio Abierto, curating visual arts projects such as Stock, Humor Versus Humor, PullFreight, etc. Some of her publications can be read in Noticias de Artecubano, Caimán Barbudo, Cuban Art News, Havana Times and Revolución y Cultura magazine. At the same time and since 2014, she assisted the Cuban artist Luis Manuel Otero Alcántara during various independent work processes such as Chong Chong Gang, Por aqui no pasó el Papa, Bodas de Papel-Unidos por el wifi, and Indian Summer Diary. I love Canada, Canada love me, - the last two were curated by Catherine Sicot and produced by Elegoa Cultural Productions. Also, since 2012 she has a permanent column in the digital publication Havana Times, where she promotes visual arts, but also where she discusses the ills of contemporary society. In 2016, together with Luis Manuel Otero, she founded the Museum of Dissidence in Cuba (MDC). On January 24, 2018 she presented, with the co-authorship of Luis Manuel Otero and as part of the event Hors Pistes: La Nación y sus ficciones, the performance Otro Tratado de París (Another Treaty of Paris). A project commissioned and produced by Centro Pompidou and Elegoa Cultural Productions. Curated by Catherine Sicot.