The meeting, which was held at the Argentine-German Chamber of Industry and Commerce, was devoted to the presentation of the Bertelsmann Transformation Index 2014 and was attended by Hauke Hartmann, Liliana De Riz and Jorge M. Streb as guest speakers. The welcoming words were given by Barbara Konner, Executive Vice President of the Argentine-German Chamber of Industry and Commerce; and Horacio Reyser, Vice President and Director of the Business Council of CADAL. The Bertelsmann Foundation and CADAL had signed an agreement for the publication in Spanish of the Bertelsmann Transformation Index (BTI) in August 2013. 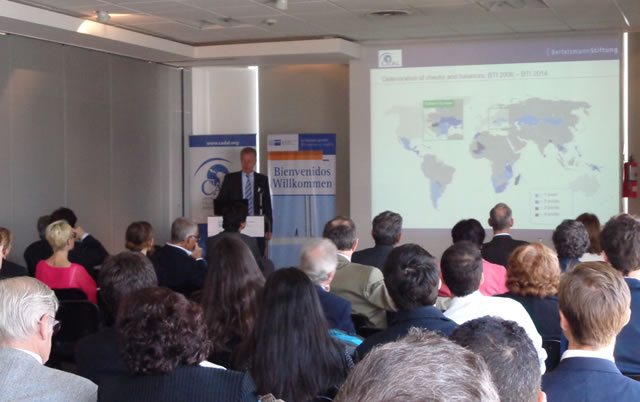 The presentation of the Transformation Index 2014 was the chosen topic for this year’s edition of the Global Latin Forum, one of CADAL’s main events. The meeting was held at the Argentine-German Chamber of Industry and Commerce and was attended by Hauke Hartmann, Liliana De Riz and Jorge M. Streb as guest speakers. 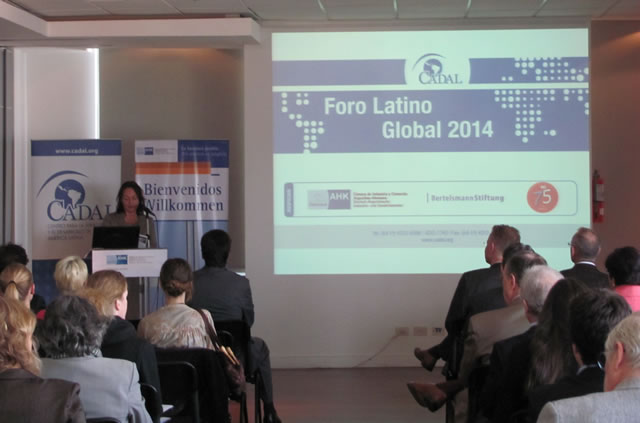 The welcome speech was given by Barbara Konner, Executive Vice President of the Argentine-German Chamber of Industry and Commerce; and Horacio Reyser, Vice President and Director of the Business Council of CADAL. 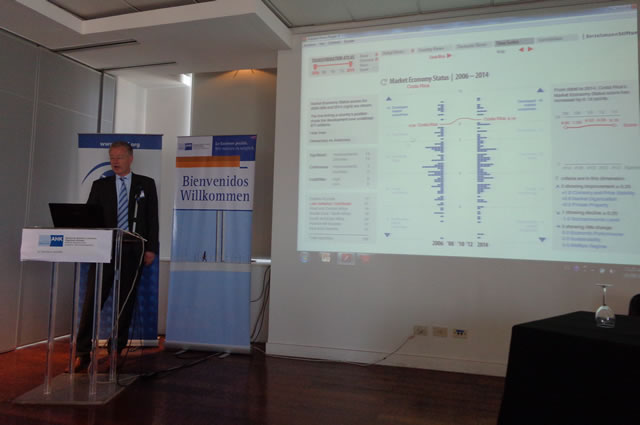 The first part of the presentation was given by Hauke Hartmann, on the methodology and global trends of the Transformation Index 2014. 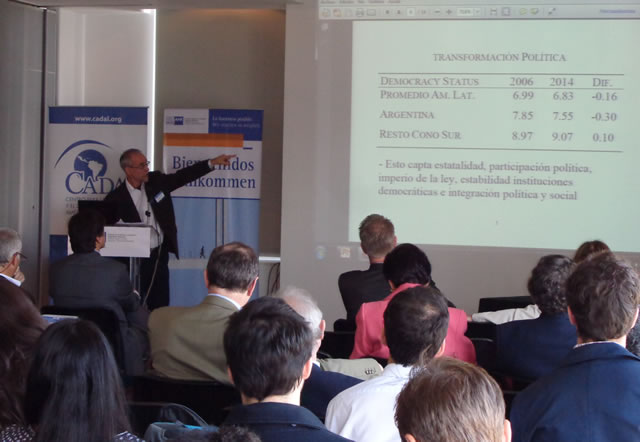 After that, the economist Jorge Streb analyzed the transformations in Latin America. 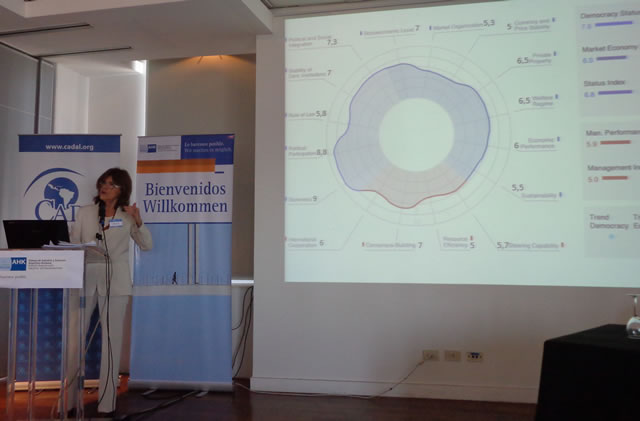 For her part, the sociologist Liliana De Riz spoke about the results of the chapter about Argentina of the Transformation Index. 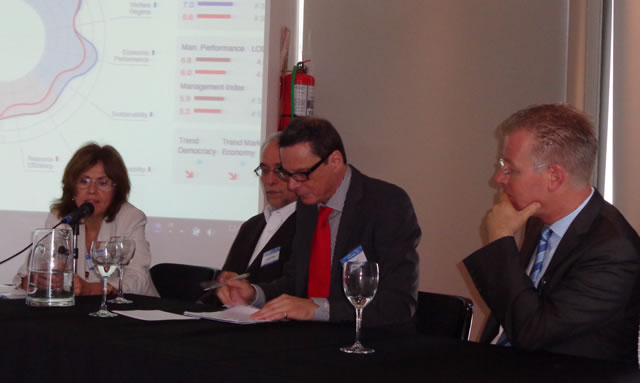 After their presentations, the guest speakers answered questions from the audience, which was moderated by the journalist Marc Koch, correspondent for Latin America of Deutsche Welle TV. 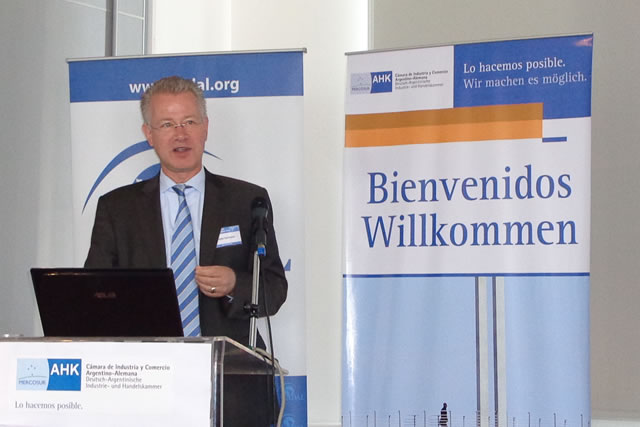 Hauke Hartmann is Senior Project Manager at the Bertelsmann Foundation and director of the BTI project “Shaping change– strategies of development and transformation”. With a thematic focus on democratization and Human Rights, he is especially interested in governance in Arab and Latin American countries. He was researcher at the Yale Center for International and Area Studies and received his doctorate for his thesis on the US Human Rights policy under President Jimmy Carter at the Free University of Berlin. He holds a master in North American Studies (John F. Kennedy Institute, Berlin) and Latin American and Caribbean Studies (State University of New York). 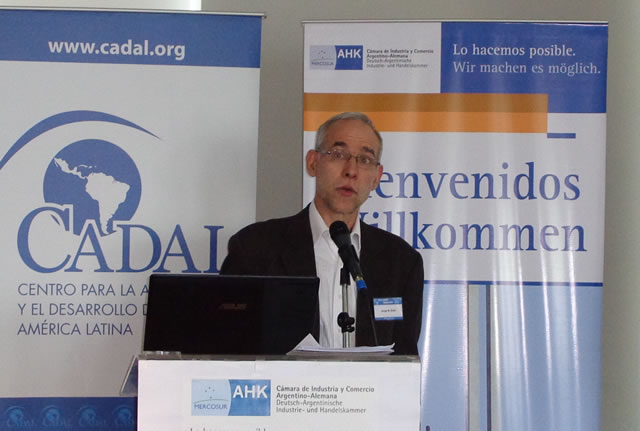 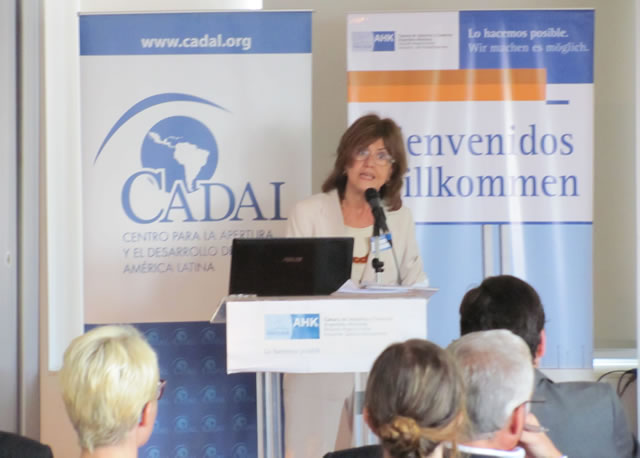 Liliana De Riz has a degree in Sociology (University of Buenos Aires) with honors and a Doctor in Sociology from the School of Higher Studies in Social Sciences of the University of Paris with Special Mention (1975). She is consulting professor in the Faculty of Social Sciences of the University of Buenos Aires and Senior Researcher of the CONICET. She was coordinator and main author of the Human Development Reports of Argentina in 2002 and 2005. She is expert in Latin American politics, has studies the electoral systems, parties, public policy and human development. Among her books: Society and politics in Chile: from Portales to Pinochet (1979), Radicals and Peronists: the National Congress between 1983 and 1989 (1994) and Politics suspended from 1966 - 1976 (2000). She received the award for Excellence in the impact of public policies granted by the UNDP (2004) and the Konex Prize in Political Science (1996).

The Bertelsmann Transformation Index (BTI) examines whether developing countries and those in transition are channeling social change towards democracy and a market economy, and assesses how they are doing. Specialists in each of these 129 countries evaluate, guided by a list of standardized criteria, the extent to which the 17 criteria has been achieved. The BTI summarizes the results of the broad study of the processes of transformation and political management in two indices. The Status Index comprises two analytical dimensions which evaluate the state of political and economic transformation, and which locates the 129 countries in their way to a democracy under the rule of law and a market economy based on the principles of social justice. The processing Index evaluates the quality of governance, which also includes the insight of of those responsible for making decisions to direct political processes.