Manuel Cuesta Morua’s book was published by CADAL’s Puente Democrático program, and has the prologue of Haroldo Dilla Alfonso and was presented at CADAL’s office with the presence of the author and comments by Fernando Pedrosa and Maria Matilde Ollier.

The book launch of "Progressive Essays from Cuba. The writings that the regime considered an attack against international peace" was held with the presence of its author, Manuel Cuesta Morua, and the comments by Fernando Pedrosa and Maria Matilde Ollier. 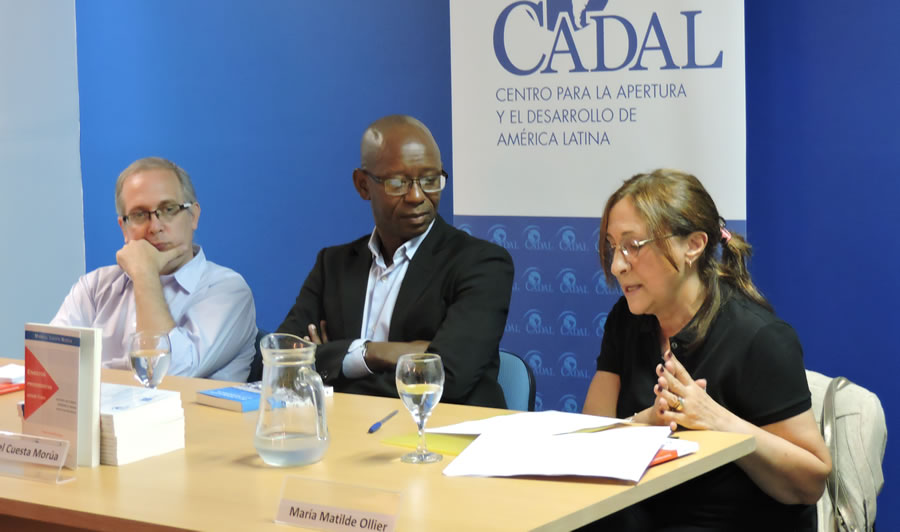 Then the book of Cuesta Morua was discussed by the political scientist Maria Matilde Ollier. 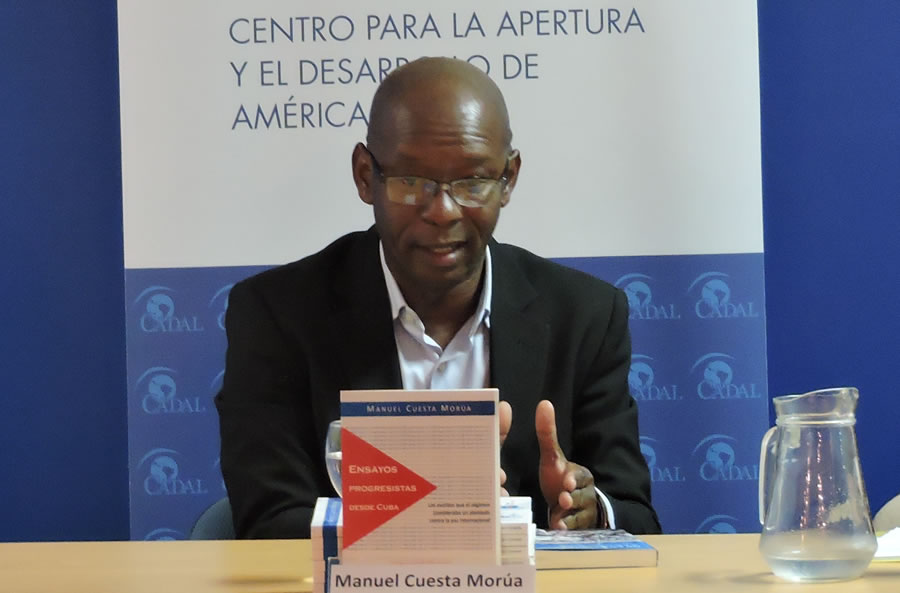 The closing of the event of the book launch of "Progressive Essays from Cuba" was conducted by the author. Manuel Cuesta Morúa graduated from History at Universidad de La Habana in 1986. Between 1986 y 1991 he worked for several official institutions. From 1988 to 1991 at the Africa House at the Museum of the Historian in Old Havana. In 1991 he was expelled for his political ideas from this last one. That same year he enters the then Social Democratic organization, Corriente Socialista Democrática Cubana, alternative organization to the regime. In 2002 he founded Arco Progresista that he currently heads. He coordinates together with other activists the Constitutional Consensus project and is member of the Citizens Committee for Racial Integration. He has suffered from numerous arrests and acts of repudiation throughout his political life and as a defender of human rights. In late January 2014 he was arrested for attempting to organize in Havana the II Alternative Forum to the CELAC Summit. 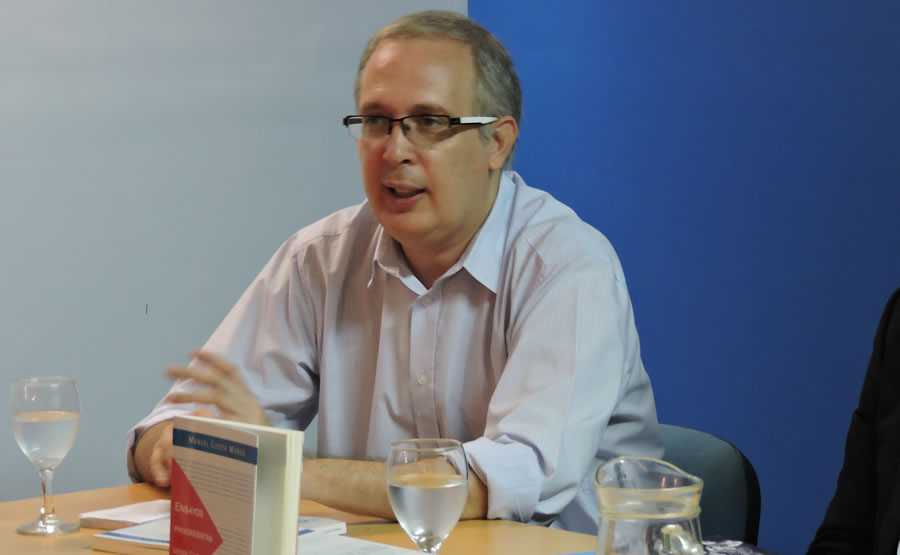 Fernando Pedrosa (1969) is historian and political scientist. He is head teacher at Universidad de Buenos Aires (UBA) and the postgraduate at Universidad del Salvador and Universidad de Belgrano. He is researcher of the Instituto de Estudios Latinoamericanos de la Facultad de Ciencias Sociales (UBA). He has a PhD in Latin American Studies and Doctor in Contemporary Political Processes at Universidad de Salamanca. He is author of the book "La otra izquierda. La socialdemocracia en América Latina" (Buenos Aires: Capital Intelectual 2012). He is a member of the Academic Committee of the Master in Latin American Social Studies of the Social Sciences Faculty (UBA) and is member of the editorial board of "Latin America Today" a Social Science Journal published by the University of Salamanca. 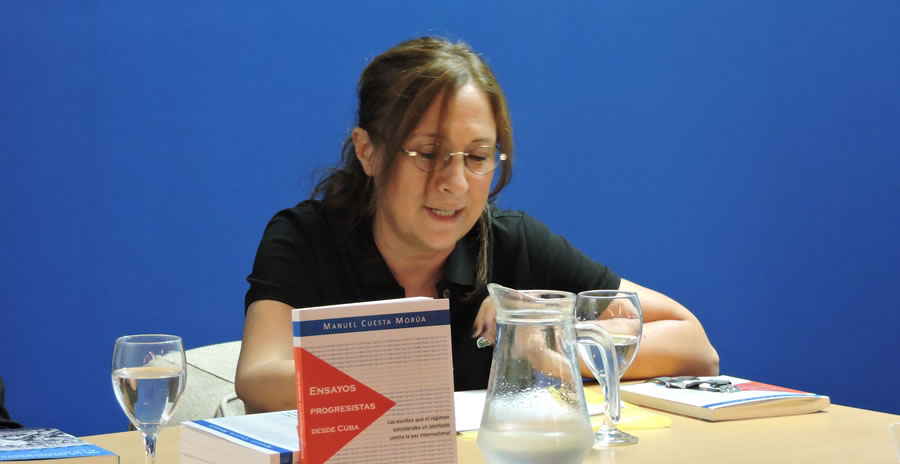 Maria Matilde Ollier has a PhD in Political Science from the University of Notre Dame (USA), Master in Social Sciences (FLACSO) and is Professor of History (UBA). She has received grants from CONICET, FLACSO, the Ford Foundation and the Department of Government and Kellogg Institute of the University of Notre Dame. She is a professor and researcher at the School of Politics and Government at the National University of San Martin. She has published articles in professional journals in the country and abroad. She is author of "The insurrectionary phenomenon and political culture. Argentina 1969-1973" (1986), "Order, power and violence" (1989), "Belief and passion. Private, public and political in the revolutionary left, 1966 -1976 "(1998)," The political coalitions in Argentina. The case of the Alliance "(2001), and co-author of" Your name in my mouth. Argentine Stories of Passion and love "(1995). 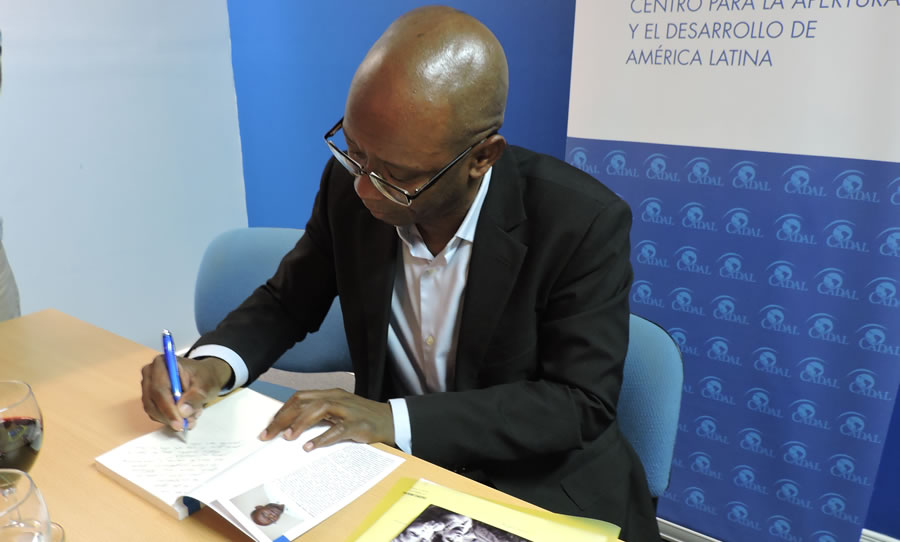 Manuel Cuesta Morua’s book, who is spokesman of Progressive Arch in Cuba, was published by CADALÄs Puente Democrático program and has a prologue by Haroldo Dilla Alfonso: "The uniqueness of Manuel and the team to which he is linked, is that they understood that it is not that easy just to produce a democratic opening or dismantling the locks on the economy, but to think about a holistic alternative that involves, above all, a new culture of coexistence. It is precisely this that the reader will find in the 14 articles and essays in this volume that the author wrote between 1997 and today."

Watch the videos of the presentation.